The 'Survival vs. Resilience' project will turn Badalona into a laboratory of art and science to anticipate the future of society 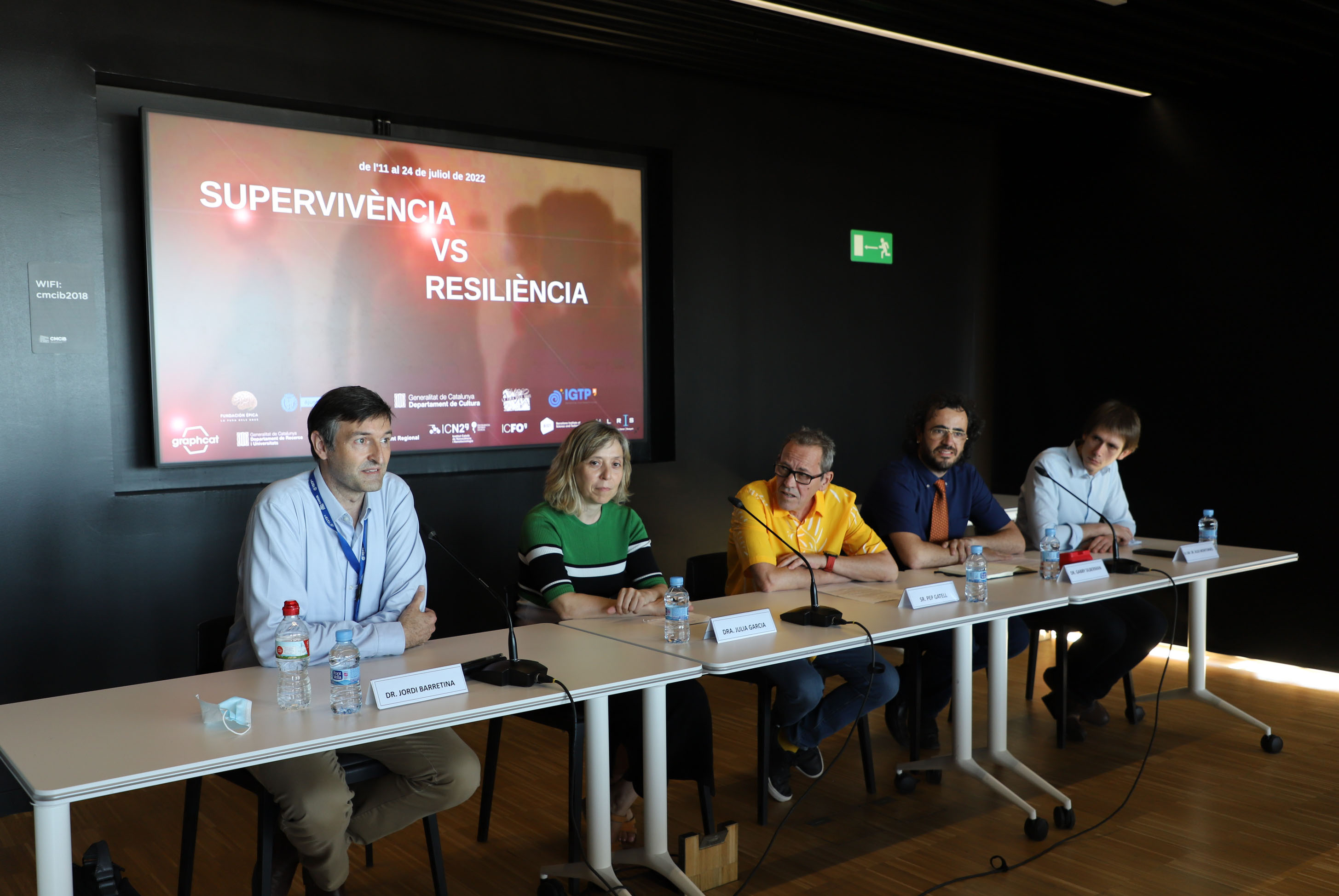 The of Fundación Épica of La Fura dels Baus Project, in collaboration with the Institut Germans Trias i Pujol and the Barcelona Institute of Science and Technology will take place from 11-24 July at the old CACI factory in Badalona.

Badalona (28/06/2022) The Fundación Épica La Fura dels Baus starts 'Survival vs Resilience', the project that will turn Badalona into a laboratory of art and science with the aim of anticipating the future of society. Badalona City Council, the Fundación Épcia La Fura dels Baus, the Germans Trias i Pujol Research Institute (IGTP) and the Barcelona Institute of Science and Technology (BIST) have presented this morning their collaboration in the framework of the new project. The activity, which will take place from July 11th to 24th, aims to address scientific challenges proposed by research groups through the performing arts. It will take place in the heart of the city of Badalona, the old CACI factory. The press conference was attended by Àlex Montornés, deputy mayor of Badalona; Jordi Barretina, director of the IGTP; Júlia García, scientific director of the IGTP; Àlex Argemí, head of communications at the Catalan Institute of Nanoscience and Nanotechnology (ICN2), one of the CERCA centers that is part of the BIST; and Pep Gatell, president of the Fundación Épica La Fura dels Baus and artistic director of La Fura dels Baus.

Dr. Júlia García wondered what impact art on research can have: "Creativity is the common denominator of both disciplines". "We have to transfer to the society what research is and why we do it: the performing arts are not as far away as it seems from science and research," added the scientific director of the IGTP.

In turn, Àlex Argemí, representing BIST, explained that the project "is a space for mutual inspiration" and that the 7 research centers composing the BIST want to "maximize the impact of science on society, as well as understand its expectations". He also highlighted that the GraphCAT project, financed with FEDER funds and with the support of the Generalitat de Catalunya, is working to make the country an international benchmark in graphene applications. "The Fundación Épica La Fura dels Baus offers a new channel, a new way of explaining what we do: not only making an emphasis on scientific innovation but also on how it is communicated," he concluded.

Pep Gatell, president of the Fundación Épica La Fura dels Baus and artistic director of La Fura dels Baus, said that science "works the future, trying to change it by contributing its knowledge". In this sense, he explained that the Fundación Épica La Fura dels Baus has been working for five years in the anticipatory arts, creating false realities of possible or probable futures. "We must be in constant contact with research centers that go hand in hand with science and technology: art cannot be left out of the equation, and we want to create a center for basic research in advanced arts," explained Gatell. "Science and technology are formidable inspirational tools, but we must have first-hand knowledge of the scientific and technological revolutions that are taking place," he added. "The contamination between disciplines is a characteristic of La Fura dels Baus and its trajectory of more than 4 decades: on this occasion, we will try to contaminate computational philosophers with neurotechnologists and scholars of linguistic and brain convergence, with graphene experts," he concluded.

Àlex Montornés, first deputy mayor of Badalona, pointed the "new point of view that brings the Fundación Épica La Fura dels Baus". Highlighting the work of Can Ruti, he explained that the project 'Survival vs Resilience' "makes art and science compatible, which are disciplines that really need to talk". This dialogue promotes and values "critical thinking".

'Survival vs. Resilience' will bring together more than 30 creatives from around the world and 5 multidisciplinary research groups. Although some of them have already worked with the organization, such as the CNRS and the UOC. Others, such as the Catalan research groups ICFO and ICN2, and the German HLRS are collaborating for the first time in this initiative. As for the first two, they focus their challenges on graphene, a material that anticipates the future of society. As for HLRS, the participating group, composed of computational philosophers, proposes experiments on trust and misinformation in human behavior. The closing of the project will be on 23rd and 24th in a final workshow at the old CACI factory in Badalona: it will be a demonstration open to the public (with previous invitation) and the media.

Fundación Épica La Fura dels Baus has four lines of work (R+D+I; dissemination, knowledge transfer and internationalization activities; sociocultural and territorial activities; and residencies) through which more than 25 multidisciplinary projects have been carried out. In the latter, more than 800 creatives and artists, and more than 100 scientists and experts have participated, achieving an audience of 15,000 people in the physical events, and generating a digital impact of more than 100. It is also noteworthy that during these 5 years it has positioned itself internationally collaborating with more than 25 countries.

Since its inception, the Foundation has worked with several national and international research centers, positioning itself as an innovative laboratory in which to carry out experiments proposed by research groups. These groups approach Epica intending to face challenges, carry out proofs of concept, or collect data for research. In this sense, Epica has not only collaborated in research, but has become a true case study for disciplines such as neuroscience, neuromuscular and neurodegenerative diseases, or philosophy. The Foundation's board of trustees is made up of the artistic directors of La Fura dels Baus: Pep Gatell, Carlus Padrissa, Alex Ollé, Pera Tantiñà, Miki Espuma. In addition, the Epica La Fura dels Baus Foundation has a Council of Wise Men and experts to ensure that the work of Epica is aligned with the future of society and the Sustainable Development Goals.