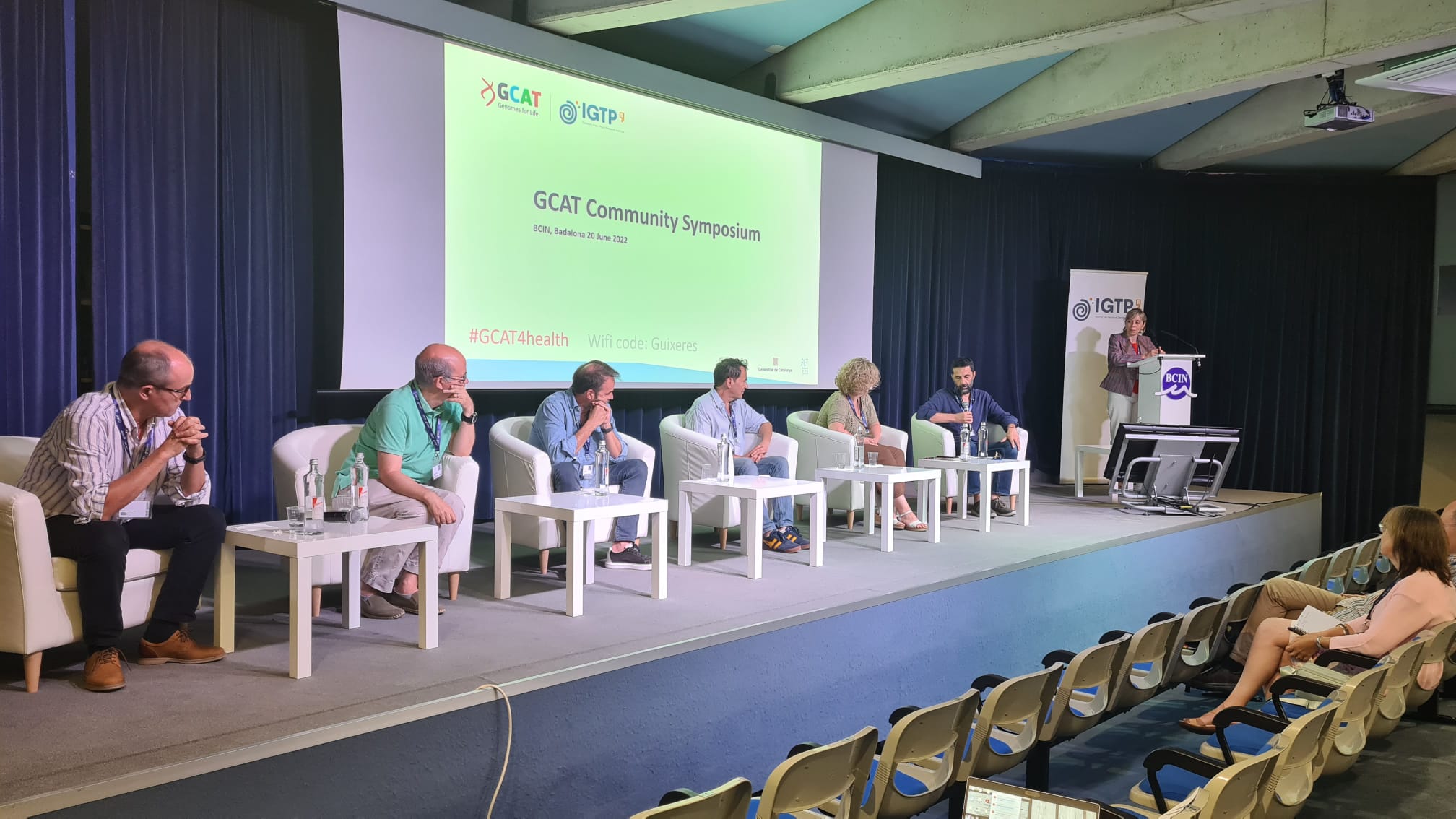 On 20 June the Germans Trias i Pujol Research Institute (IGTP) celebrated the GCAT|Genomes for Life Community Symposium at the Badalona International Business Center (BCIN). GCAT is a strategic project of IGTP and the meeting, this year by invitation-only format, included national experts in the fields of genomics and precision medicine to discuss the status of prospective cohorts in Spain in general and to showcase the current research being generated by the GCAT cohort in particular.

The meeting was opened by Ms Montserrat Llavayol, Deputy Director General of Health Research and Innovation from the Catalan Ministry of Health. The keynote lectures were given by three experts leading large genomics and precision medicine projects. Firstly, Prof Marina Pollán, Director of the National Centre of Epidemiology of the Instituto de Salud Carlos III spoke on the IMPaCT Cohort in Spain; Pollán outlined the design of the cohort focusing on precision and preventive medicine. Prof Alfonso Valencia, ICREA Research Professor and Director of the Life Sciences Department at the Barcelona Supercomputing Centre (BSC), Director of the Spanish National Bioinformatics Institute (INB) and Head of the Spanish Node of the European Bioinformatics Infrastructure ELIXIR, then spoke on several aspects related with data for precision medicine. Valencia explained how the IMPaCT data pillar will manage the collection, storage, access and use of data from the cohort, in Spain and in the context of ELIXIR, the pan European cohort. Finally, Prof Arcadi Navarro, Professor of Genetics at Universitat Pompeu Fabra and Director of Barcelona Beta Brain Research Center, completed the trio with a talk entitled "No precision medicine without sharing," in which he gave a summary of the challenges and solutions being developed to use sensitive health data securely.

"GCAT a cohort well embedded in the research environment at the Catalan, Spanish and European level, includes real world data from mobile apps and we are planning to add imaging data" explains Dr Rafael de Cid, Scientific Director of the GCAT Cohort at the IGPT.  "GCAT is representative of the population of Catalonia and is already included in many national and international consortia to identify genetic and environmental factors involved in diseases. It is also well-positioned to work with the wider Spanish cohort"

The second part of symposium focussed on the GCAT research ecosystem and where and how the data is being used. The speakers highlighted emblematic projects underway using GCAT data. "The GCAT project has some unique and specific features being one of the most advanced cohorts for data sharing in Europe. The data availability of GCAT was ready to impact directly on public health during the COVID-19 pandemic, to give just one example" explains Dr Julia García-Prado, Scientific Director of the IGTP. Prof Manolis Kogevinas, Scientific Director of the Severo Ochoa distinction at ISGlobal, described several projects studying genomic and environmental data, the latter being collected on mobile apps in some cases. Published results show how air quality, light pollution and other factors can affect the response to diseases in general and covid-19 in particular. Dr Carlota Dobaño, of the Immunology of Malaria Group, Health and Environment at ISGLobal, enlarged on studies of immune response in vaccinated and infected individuals during the Covid-19 pandemic, providing vital information on when to give boosters, for example.

The GCAT cohort has allowed for better identification of structural variants, including very rare variants, as explained by Prof David Torrents, from the Computational Genomics Group at the Barcelona Supercomputing Center (BSC) and ICREA Research Professor. Dr Francesc Calafell, of the Department of Medicine and Life Sciences, Universitat Pompeu Fabra and Institut de Biologia Evolutiva (CSIC-UPF) has described the use of GCAT for forensic genetics, for both contemporary studies and studies on archaeological findings. In the last talk of this session Dr Gabriel Capellá, General Director of the Bellvitge Biomedical Research Institute (IDIBELL) and Director Hereditary Cancer Programme, Institut Català d'Oncologia described how the GCAT cohort was being used in studies of hereditary cancer to prevent biases, and how it was helping in the study of comorbidities of cancer, a traditionally complex area of research.

After a lively discussion involving those participating in person and online, the session was closed by Dr Carmen Cabezas, Secretary for Public Health of the Ministry of Health of the Government of Catalonia, who highlighted the potential of cohorts like GCAT to inform public health policies.

As other international cohorts will, GCAT is amassing extremely high-quality data as it follows 20,000 initially healthy citizens and maps their genetic sequences, lifestyle and habits data and clinical information from medical records, which are accessed through the Catalan PADRIS system as explained in the session by Dr Ramon Roman and Mr Tomàs Salas of the Agència de Qualitat i Avaluació Sanitàries de Catalunya (AQuAS). The wealth of data continues to grow and the participants are periodically asked for new blood samples or to complete follow-up questionnaires as time passes. In closing the meeting, Dr Jordi Barretina, Director of the IGTP, emphasized the value of GCAT and other cohorts and its importance for biomedical research and public health.

This year the GCAT celebrates ten years since the start of a project to create a representative cohort of the population living in Catalonia. 20,000 volunteers agreed to participate and their recruitment and sample collection was carried out with the collaboration of the Catalan Blood and Tissue Bank (BST). Genomic analysis has been carried out in conjunction with the National Center for Genomic Analysis of the Center for Genomic Regulation in Barcelona (CNAG -CRG). GCAT|Genomes for Life has received financial support from the Spanish Government and the Government of Catalonia.

After the initial recruitment and analysis stage, the cohort started participating in national and international research consortiums. Since 2018 the GCAT has contributed to notable biomedical discoveries and has participated in over 30 projects. Data is available, following the FAIR Guidelines (Guidelines for findable, accessible, interoperable and reusable data), to the international scientific community.